The Sameness in a Consistent Change | Book Review 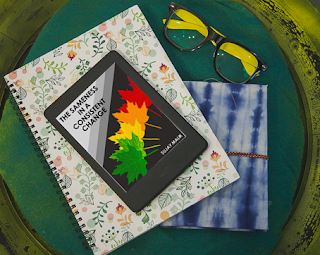 The leaf changing color through different seasons yet retaining its shape on the cover is a perfect depiction of the title, “The Sameness in a Consistent Change” It is a simple read which you can finish in a day’s worth of time with easy to understand language. The blurb is very descriptive and paints the picture of expectations you will have from the book. The character, Ramanuj, Pallavi, and Sharda are depicted in a straightforward but grand way. The title is very attractive and what made me read this one in first place. It is good for one time read and makes a good collectible for your kindle.

The wheel of time is a fascinating force. Sometimes it seems to only crawl along, while at other times it simply hustles. And when you tend to look behind, you expect that most puzzles would fall in place. But do they eventually? Ramanuj, a village boy is confused about most things. He shares a strange rapport with his father, who, despite financial issues doesn’t stall his education. But Ramanuj has no idea what to do with himself. Then one day things change and change permanently. There is no looking back from this bend; there cannot be. He meets Mr. Shrirangpure, through a chance meeting in a hospital through his daughter Pallavi. Something prompts him to appear more ambitious than he would like to have been. Impoverished and submissive, he manages to rise above the shackles with time, even though everything is still stuck to his past. But now he cannot get back. He doesn’t want to. Until a revelation, prompts him to go back to his roots again. To the same tree, with which he shares a bond; to the drain water, with which he has shared many a memory; and to the same surrounding, which formed his core once. This is a story of a boy who tried to end his life once. He loved as well and tried to rise to a level to become worthy of it. A boy, whose journey is all about mostly looking back. ‘The Sameness in a Consistent Change’ is a story of this interesting journey. A journey, devoid of a destination, perhaps. But the fun, sometimes, lies only in the journey.
- January 31, 2019