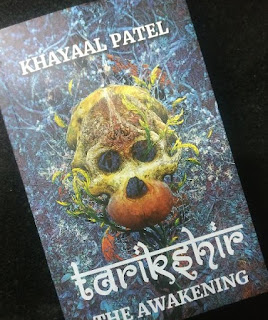 Story Gist:
Raja Ravindra, king of the Devangarh kingdom in Rajasthan is set to go on war with the British army which is led by Walken. However, he is found dead in a tent which was set for the war even before the battle could start. Rudra Pratap Chauhan, son of Raj Ravindra, takes over command, and is also found dead under circumstances which no one could explain. A power called Tarikshir is in potential danger of being released, if this happens, the entire mankind is in danger. Who knows about this power? And who knows how to stop it from being released? Read “Tarikshir: The Awakening” to find out.

Book evaluation:
This story is perfect blend of all the good elements of mystery, thriller, suspense, and action. The character development is very well defined. The narration and language used is fine tuned for the readers to grasp the entire plot. Every scene is described to such precision that you will feel as if you are seeing a feature film (I hope they do adopt in into a movie!) It is difficult guess the next line of action for characters and the twists are incorporated at all the right places. It is a good book for beginners as well. Grab a copy now!!
- October 09, 2018