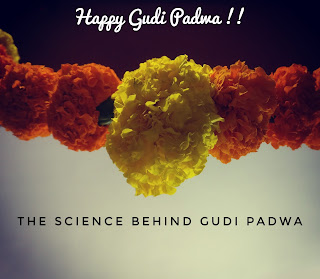 Maharashtra and Maharashtrians around the world celebrate Gudi Padwa today. A new year marking the start of Chaitra Month as per Hindu Calendar. All are busy in preparations, the Gudi is up, rangoli is done, flowers decorate the corridors, and the home is smelling of traditional dishes being cooked. However, how many of us actually know and understand the 'why' behind Gudi Padwa? As children, when we get curious over everything and ask questions, we must have asked 'Why do we celebrate Gudi Padwa?' Our parents must have told us, 'because it is our new year, we have been celebrating it for many years now!' and they would have explained us the rituals and traditions but out of all this, only one thing must have excited us, new clothes! Our basic question though, has still remained unanswered, 'Why do we celebrate Gudi Padwa?'

Indian culture has never been discreet or irrational, it has openly embraced science and aligned the festivals and rituals to it. Gudi Padwa is celebrated as Ugadi in Andhra Pradesh, Cheti Chand by Sindhis, Navreh by Kashmiris, and in North East Manipur, this same festival is known as Sajibu Nongma Panba Cheiraoba. Without dwelling much on the traditional aspect of this festival, let us view it from a different angle.  If we look at Gudi Padwa logically, we will certainly be delighted to know the following rationals behind it;

1. Gudi Padwa is known as the new year as the Lunar Calendar of Hindu's starts from this day. It is the first day of Marathi calendar of Chaitra and on a similar line first day of Sindhi month of Chet, hence they celebrate it as Cheti Chand.

2. A mixture of Neem leaves, tamarind, and Jaggery is eaten as Prasad during Gudi Padwa. Neem signifies the bitterness or sorrows one cannot run away from whereas Jaggery is the sweetness or happiness we all experience. This imparts the learning that one must move ahead is life balancing both the positive and negative aspect of life. Besides, Neem, Tamarind, and Jaggery have medicinal properties. When consumed together it makes way for detoxification of the blood and strengthening the immune system. Not only is the body purified but also positive thoughts are built in an individual when the logic is known. Sindhis celebrate it by worshipping water - the main elixir of life - signifying that life needs to be celebrated. For Ugadi, a special preparation of pachadi is prepared which includes flavours of sweet, sour, salty and bitter, reinforcing the above logic.

3. The Gudi which is usually erected at entrance and windows of households is not an ancient way to celebrate this festival. This tradition was started by Chatrapati Shivaji Maharaja. This was done keeping in mind that the aspects of this festival must reach every individual. Being the learned King that he was, Shivaji Maharaj understood the importance of imparting the right knowledge. A traditional Gudi consists of Mango leaf, cloth, Copper vessel, flowers, and the surrounding area is decorated with rangoli, all of this has the properties of welcoming happy vibes and fulfiling the aim of spreading the message. Since it was started by Shivaji Maharaja, the Gudi is absent from most of the other religious celebrations. However, the rangoli, flower garlands, food preparation, and of course, the new clothes remain common. For Navrej, the preparations by Kashmiri Pandits is similar to that of Iranians celebrating Navroz. They worship the new calendar on this day.

4. India is considered to be dominated by Agriculture, more in the past than it is now. This day marks the beginning of spring and harvesting season for farmers and hence the celebrations.

5. Spiritually speaking, for Hindus, Lord Rama (the seventh incarnation of Lord Vishnu), Hanumana, Laxamana, and Sita reached Ayodhya. For Sindhis, this day marks as the birth of Lord Jhulellal (incarnation of Lord Varuna) It is also believed that Lord Brahma created the Universe on this very day which again marks a new beginning.

6. Astrologically, this day is marked as the commencement of New Moon. Also, the Sun rises to mark the beginning of first zodiac sign, Aries, again marking a new beginning and cycle thru the perspective of Zodiac.

7. Sajibu Nongma Panba Cheiraoba celebrated by North East Manipur marks the start of the new calendar and traditionally, they indulge in spring cleaning before the festival arrives. The same is followed by Maharashtrians before Gudi Padwa. This helps to throw out negativity from the home we reside in and making it a better place to live.

8. The Sun crosses the equator during Gudi Padwa which is the reason why we have equal length of day and night for a while. This is also the reason why rising early in the morning and worshipping is considered to be auspicious. The rays of Sun are prominent in the first 5 to 7 minutes of its rising, emitting the Teja and Prajapati rays. The rays are emitted by Sun at different frequencies and while it is over the equator the frequencies of Teja and Prajapati are at the strongest thru the year. As per ancient texts, it is believed that when the body receives the rays emitted at this frequency, the rays penetrate the body and can be retained for a longer time, improving the bodily functions.

9. None of our festivals is complete without the basic prayer chants. Every religion has its respective chants, however, these chants have a very positive effect on the mind and brain functioning. It has been scientifically proven that the sound you hear has an effect on even the tiniest cell of your body. The vibrations cause the cells to either develop or decay at the faster rate. It has been observed that when we chant Om, mantras, subtle prayers, shankhanaad, the frequency of sound of the bell, and low pitched prayers majorly have a positive effect on cells allowing it to improve the body function.

We have always grown up hearing stories from our parents and follow them without knowing the logically rational behind them. Indian traditions hold deeper truths than we can imagine. In all the westernization of world, we have lost the touch of our own culture and values. Now, it is our responsibilities on how we let our children see this world and how we teach them the importance of our traditions. Our Vedas, texts, mantras, are already developed in a way that even in the modern world, we can very easily follow them to experience peace and leading a fulfilling life. If never knew the logic because our parents never did, if we are able to arm our future generations with the logic of our culture, traditions, festivals, and why we follow the custom that we do, then definitely we will see a much smarter, self-educated, and happy generation ahead. If we can keep our Children happy and raise happy kids, we are truely headed towards a more developed future. It is in our hands now to allow what is right and take a U-turn to a time when India was one of the most developed nations with the powerful tool of knowledge.

Here is wishing you all a very Happy Gudi Padwa, Ugadi, Cheti Chand, Navreh, and Sajibu Nongma Panba Cheiraoba! Different names, diverse religions, but our roots are same and joined together by one nation.
|| Hari: Om || 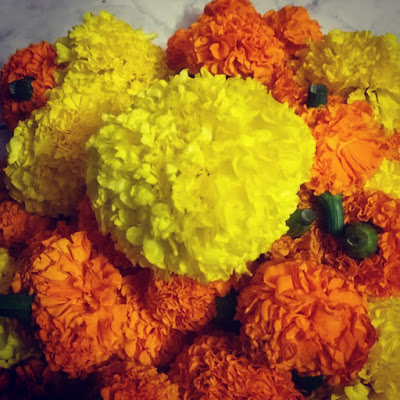 Thank you for this timely post! New year wishes!